Where to Ski in January

A dazzling scenery of peaks and slopes, the French Alps is one of the most popular locations in the world for high-end skiing. 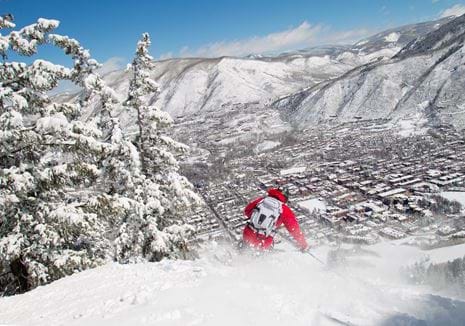 The USA is home to an extensive range of luxury ski chalets and hotels, spanning a number of states and diverse locations.

For seasoned and experienced skiers, Switzerland is a plentiful playground.

Where to Ski in January

Guaranteed fresh snow, peaceful slopes, and relaxed travel - skiing in January is perfect for both serious skiers and those looking for a picturesque luxury ski holiday. January has the best chances for good snow, especially in the luxury ski resorts dotted around the French and Swiss Alps, and the lower temperatures will ensure snow that is powdery and crisp.

Skiing in January means that you can benefit from calm, small crowds at the airports and less congested highways. By this time, the Christmas and New Year’s rush should be long gone, and skiers can enjoy near-deserted pistes and maximise their lift-pass usage.

See our top picks for the best places to ski in January - from France and Switzerland to America and Japan.

Where to go Skiing in January in Europe

Skiing in France in January

Some may wonder whether skiing in France in January is the best idea. By the time January comes around in France, school is back in session and crowds and queues are significantly cut down. This leaves one of the most snow-sure months in the French Alps completely available and open to skiers with flexible holiday allowances, be it beginners who will benefit from the extra time available on the snow to advanced skiers who may have the first claim to untouched off-piste slopes.

Our top picks for the best place to holiday in January in France are the luxury ski resorts of Chamonix, Avoriaz, and Méribel.

Located at the foot of Mount Blanc, Chamonix is known for its long relationship with Alpine sports and as the ultimate tourist attraction. This ski domain boasts epic terrain, making it a popular ski destination and excellently challenging for advanced skiers. Spending time in Chamonix in January is a must for expert skiers looking for daring slopes, mountain climbing, or hang-gliding. Novice skiers can enjoy the varied terrain, with truly something for everyone - especially in the powder-fresh January snow.

Oxford Ski Company recommends: Staying at the Chalet Alaska or the catered Chalet Rytola for a truly luxurious experience in Chamonix - complete with hot tubs, home cinemas, and the best views in the Alps.

Average snowfall in January in Chamonix

Explore all the luxury ski chalets and hotels you may book in Chamonix in January here.

Avoriaz is a popular resort located above the town of Morzine, and January skiers can enjoy the unique winter wonderland of horse-drawn sleighs, stunning mountain scenery, and fantastic runs that are at the ideal altitude for mid-winter skiing. Our hand-picked selection of luxury chalets and hotels in Avoriaz promise a skiing holiday with thoughtful accommodations and snow-filled amenities. Enjoy an expansive ski area with ski runs, cross-country ski trails, and eight amazing loops which pass through snow-frosted pine forests and extraordinary views.

Average snowfall in January in Avoriaz

See the luxury amenities, such as catering, hot tubs, and spa facilities, offered in our Avoriaz chalets and hotels here.

Completely snow-sure in January, Méribel is one of the most popular ski resorts in Europe and is located at the heart of the vast Three Valleys area. Although it is a favourite ski destination for those in Europe and beyond, you can expect significantly smaller crowds in January and over 600km of pristine, untouched pistes. Even in the coldest months, you can find South-facing ski areas with bright slopes and warm sunshine.

The Méribel resort is energetic and lively, with world-famous apres-ski and nightlife, from table-top dancing at La Folie Douce to skiing into Le Rond Point after a long day out on the slopes.

Oxford Ski Company recommends: Staying in the Chalet Truffe Blanche -  a sprawling chalet that sleeps up to 18 and features a Roman-era-inspired spa including a 15m pool.

Average snowfall in January in Méribel

Discover all the luxury, snow-capped chalets and hotels available to book in Méribel in January here.

Many agree that Swiss mountain villages look their prettiest during the frosty winter months, with snow-dusted, wooden chalets and a picturesque Alpine atmosphere. However, in January, many of these Swiss resorts come alive with eccentric energy - from horse races on frozen lakes to A-list celebrities and royalty sightings.

With clearer slopes and small crowds, we would recommend the Davos, Klosters, and St. Moritz resorts for the best skiing in January in Switzerland. These top holiday locations offer novices and intermediates excellent skiing trails and slopes to strengthen their skills as well as attractive challenges for the most demanding skiers.

Easily accessible from Zurich and Innsbruck, Davos is a top destination for intermediate skiers. This resort is renowned for cross-country skiing with a few exciting off-piste runs for adventurous skiers. There is over 300km of pistes for intermediate skiers to choose from at the six main ski areas: Parsenn/Gostschna, Pischahom, Madrisahorn, Jakobshorn, Schatzalp and Rinerhorn. The World Economic Forum is held in January, ensuring a bustling town with contrastingly empty slopes. Uncrowded pistes paired with the fresh January powder dumps, make Davos the perfect place to ski in January in Switzerland.

Oxford Ski Company recommends: Staying in the Tivoli Lodge - one of the best chalets in the Alps with grand architecture, an open fireplace, and an extensive wine cellar.

Average snowfall in January in Davos

A favourite destination of both King Charles and the King of Sweden, Klosters is made famous by royal connections and dazzling star sightings. The charming village and cosy, snowed-in chalets are perfect for a January holiday, with ski-in/ski-out options that keep you close to the slopes. This ski area, linked to Davos, is perfect for advanced and intermediate skiers with off-piste terrain and cruising runs.

Oxford Ski Company recommends: You take a cue from Prince Harry and buy a bottle of Armagnac or génépi at the cosy night club, Casa Antica.

Average snowfall in January in Klosters

Explore the fully-catered chalets available to book in Klosters in January here.

This stunningly exclusive resort is known for its Michelin-starred restaurants, luxury boutique shopping, and its overall glitzy and unashamedly opulent atmosphere. Located at 1,770 metres in the Engadine Valley, St. Moritz boasts a large number of dry and sunny days with high-quality skiing and striking mountain views. This renowned “champagne climate” paired with the therapeutic springs makes St. Moritz the perfect location for well-heeled clientele looking for an ultra-luxurious winter ski holiday.

We have hand-selected many five-star hotels and luxury St Moritz chalets for you to explore here.

There are plenty of options for ski holidays in America in January. The Christmas and New Year’s crowds will have left by this point, and American holidays such as Spring Break and President's Day are months and weeks away. Skiing in January in the United States is perfect for serious skiers who are looking for the best powder days with big queues and big crowds out of sight and out of mind.

Our top pick for skiing in January in the United States is Aspen, Colorado. Once an old Colorado mining town, Aspen is now easily considered the United State’s most celebrated ski resort with reliable fresh powder in mid-winter months. Paired with its sister town, Snowmass Village, this ski area covers four of the best ski mountains in the USA - Aspen, Buttermilk, Highlands and Snowmass. Expect traditional American hospitality, indulgent meals for adventurous foodies, and quaint luxury chalets and hotels.

Oxford Ski Company recommends: Trying the indulgent, post-ski meals available, such as a rack of elk at Gwyn’s High Alpine on Snowmass or a Wagyu double cheeseburger with a side of truffle fries at The Little Nell’s Ajax Tavern.

Average snowfall in January in Aspen

Skiing in Japan in January

January is well known as the best time to plan a ski holiday in Japan. Although the slopes won't be as quiet as the ones in Europe or the United States (especially at the beginning of the month), January is the start of the “ocean-effect” snow phenomenon. This is when frosty air blown over the Siberian plains is swept over the Sea of Japan, resulting in a light, fluffy powder being released along the western mountains in dumps that are waist to neck-deep.

Japan experiences some of the snowiest winters on the planet due to this “ocean-effect” snow. Our top pick for the best place to ski in Japan in January would be Nozawa Onsen - a premier destination to enjoy the famous powder with 1,085 metres of vertical downhill skiing and 36 runs (the longest being seven miles long).

Nozawa Onsen is the perfect place for a full cultural experience. Try sleeping on futons laid out on a tatami mat at the Ryokan traditional Inn, seeing the famous bathing snow monkeys, and exploring the town with wood-panneled buildings that have survived since the Edo period (1603-1868).